Highlighting the 2021 Support Professional of the Year 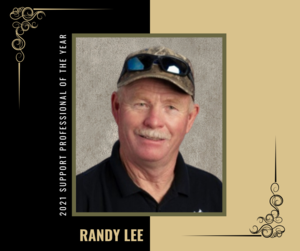 The 2021 Support Professional of the Year is Dugway Schools Custodian Randy Lee.

For the past 27 years, Randy “Red” Lee has worked for the Tooele County School District as a bus mechanic, maintenance worker, and most recently as the custodian of Dugway Schools. The nickname “Red” comes from the red hair he had in his youth.

Though he isn’t one who likes a lot of attention, those who have seen him work say he is worthy of plenty of praise.

“Randy is an exemplary employee that continually goes above and beyond to make sure staff, students, and patrons are taken care of,” said Ian Silva Operations director. “I’m very grateful for his hard work and dedication to everything he does. He is an amazing person that truly cares about others.”

“Randy is one of the most dedicated and hardest working men I know,” said West.

Former Dugway Schools Principal Bryce Eardley nominated Lee for the award. In his nomination letter, Eardley mentioned how he had always heard positive things about Lee, but that he didn’t fully understand the accolades until he saw Lee in person.

“One can’t fully appreciate the tornado of awesomeness that is Red until you see him in action,” said Eardley. “From the moment he starts, to the moment he ends the day, Red is working. Nothing is missed – nooks, crannies, corners, tops, bottoms, everything – Red makes sure it all gets cleaned.”

Director of Student and School Safety, Jeff Wyatt, who previously served as principal of Dugway Schools, noticed the same remarkable work ethic and energy in Lee.

“He is one of the hardest working people that I have ever worked around,” said Wyatt. “He never sits still. He literally jogs from one job to the next, and I am not kidding when I say he jogs between tasks. He is always looking for other things to enhance or make better.”

“If there is something that he doesn’t understand, which is rare, he will research information on his own until he figures the problem out,” said Wyatt. “On many occasions, I would find out about situations that he had already found and handled before I was even aware of a problem. I can’t tell you how many times each day I would hear from staff members who were just amazed and appreciative of all that he does.”

Both Wyatt and Eardley described Lee as personable and friendly.

“Randy can get along with anyone and he is always positive,” said Wyatt. “He is one of the most upbeat and happy people that I have ever worked around and always has a smile on his face.”

Eardley said Lee knows each student by name and always says a quick hello to any faculty members he sees throughout the day.

“His impact on our school can’t be quantified,” said Eardley.

Although Dugway Schools has been open for six years, Eardley said it still looks like it just opened today.

“Red takes absolute pride in ensuring this building is always in tip-top shape,” said Eardley. “What’s even more remarkable is how personable and friendly he is with everyone, including the students.”

Lee said he feels like the building is one of his babies.

“When you keep things clean and maintained, it is like it becomes part of your soul.”

Lee said one of the best parts of his job is the fantastic faculty and staff he gets to work with.