Highlighting the 2021 Teacher of the Year 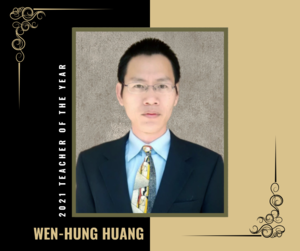 Wen-Hung Huang grew up in Taiwan, more than 6,700 miles away from where he now teaches Mandarin Chinese to first-grade students in the Tooele County School District.

As a child, he always dreamed of becoming a teacher, but it wasn’t until he was nearly 40 years old that he began his journey to become an educator.

In Taiwan, at the age of 16, he worked during the day operating industrial milling machinery and at night he attended school. He then worked as a door-to-door salesman and eventually managed 30 salespeople. Later, he served as a radio station broadcaster and was promoted to serve as the station chief. But, his dream of becoming a teacher kept weighing on his mind. When he was 37 years old, he decided to resign from the radio station to pursue his educational aspirations in the United States, even though he was heavily criticized for his career change.

Since moving to the U.S., Huang has earned a bachelor’s degree and two master’s degrees as well as Dual Language Immersion and English as a Second Language endorsements. He has taught Mandarin Chinese at the University of Utah and completed his student teaching in both Chinese and ESL at East High School in Salt Lake City. For the past seven years, he has been teaching Chinese at Northlake Elementary School in Tooele, Utah.

“Mr. Huang is a natural leader,” said former TCSD Dual Language Curriculum Director Renee Milne. “I’m proud of how he continues to amaze us all with his dedication to the art and science of teaching.”

Milne said people are always impressed by how animated he is while teaching. Northlake Elementary Principal Stephanie Lindsay agreed.

“He is a teacher unlike any other,” said Lindsay. “He uses his whole body to help communicate what he’s teaching in his classroom. His classroom is full of rich experiences for students to stay engaged in learning math and Chinese. His students interact with the Chinese language through song, oral and written language, technology, and much more.”

“He has created such a wonderful and engaging classroom for our Chinese DLI students,” said Mau. “Because of his influence, Tooele has one of the best Chinese DLI programs in the state.”

Mau recalled one of her visits to his classroom captured perfectly the type of teacher he is.

“Mr. Huang was giving a lesson and teaching first-graders some new Chinese phrases,” said Mau. “Full of energy as he always is, he was gesturing and moving from one side of the room to the other. Students were hanging on his every word and tracking him back and forth. One student tracked him so far that he even fell out of his chair in his eagerness to not miss a single thing Mr. Huang said or did.”

Huang said one of his favorite parts of teaching is seeing how much students naturally observe and absorb what is being taught to them. He also likes how first-graders can move on from one emotion to the next.

“They may be upset for one to three minutes,” said Huang. “But then they move on and let it go. That’s something that’s harder for older students to do.”

He attributes his success in life to the love of his wife and two children and to his mindset of never giving up.

“I don’t think of myself as smart, but I keep trying and never give up,” said Huang. “If I do something wrong, I make a modification and try again.”

One thing he said helps him to be a successful teacher is to keep good data.

“I can look back to the data from years before and see what worked and what didn’t,” said Huang. “If something is not working, I can modify the lesson to make it better and keep records of what was changed to make the outcome better for the next year.”

In addition to teaching students in-person, Huang also maintains a class website for his students to engage in Chinese language practice after school. Parents can also use the site to participate and provide support to their children.